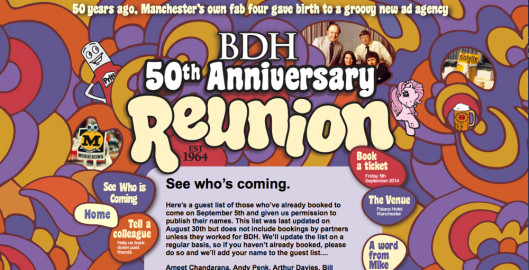 John Bracken and Phil McAleavy, directors at CQ2 will both be attending the forthcoming BDH 50th Anniversary Reunion next month.

Both worked at BDH prior to forming Q2 (which subsequently became CQ2 in 2004).

BDH, the regions largest independent agency was renowned for its high standards and creativity and was a great place to learn and work.

John was an art director working on Brother, ICI, Indesit, Coloroll and GMPTE. Phil was head of typography for a number of years. After a brief hiatus, the pair formed their own design agency.

John and Phil are looking forward to seeing old aquaintances, however they will not be bringing their dancing shoes!